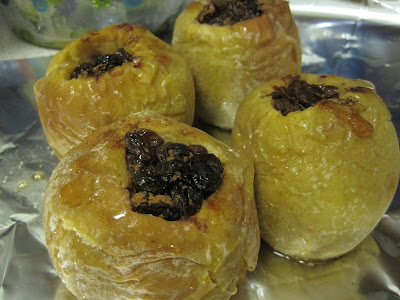 [This isn’t exactly my recipe, but since I have participated in the buying of ingredients and it was baked in my oven, I figure it counts :)]

AK first made these divine baked apples for me a few months ago (it’s his mom’s recipe, thanks JW!), and it’s a great alternative dessert if you don’t want to serve baked goods, or if you have vegan friends but don’t want to just serve raw fruit.

AK’s mom uses Rome apples, but I have also tried these with Braeburn apples and they were great. Whatever apples are good for making apple pie will work. Just hollow out the center, fill them with raisins, sprinkle with cinnamon, drizzle with agave and them bake them in the oven until they are soft and sweet. Yum!

I like eating the apples as is, but I bet they would be great chopped and served over oatmeal or yogurt for breakfast, or over ice cream for dessert!

Directions:
Core the apples so you remove the seeds and most of the core, but don’t cut all the way through to the bottom. Place in large baking dish.
Fill apple centers with raisins until they are full (amount will depend on how big the apples are and how much you cut out). Sprinkle with cinnamon, drizzle with agave and bake in the oven at 375 degrees for 45-60 minutes until the apples are soft. Serve hot or cold.